A forest library for listening to the sounds of nature was opened in the woods of Võru County 21.09

On 18 September, in a forest clearing in Võru County, near RMK’s Pähni Nature Centre, an installation of three giant wooden megaphones, constructed by students from the Estonian Academy of Arts, was opened, where the sounds of nature can be listened to in an amplified manner.
The megaphones came to be as the first-year course project of interior architecture students from the Estonian Academy of Arts, where the students set out to conceptualise the idea of a forest library. Of the completed concept proposals, the project “RUUP”, by Birgit Õigus, was chosen. Construction took place in August, carried out by nine students in the EAA workshop, in Tallinn. Then, the three giant megaphones were transported by truck to their new home, near Pähni, in Võru County.

The megaphones of the forest library, each with a diameter of three metres, offer passers by some space for their thoughts and spending time by themselves. “The trademark of Estonia is both the abundance of sounds in our forest as well as the silence there,” commented Valdur Mikita, a writer and semiotician involved in the project. “In the megaphones, thoughts can be heard. It is a place for browsing the “book of nature,” for listening to and reading the forest through sound,” added Mikita.

According to Marge Rammo, Head of the Nature Management Department at RMK, the megaphones offer shelter for the wanderer, and a modest hiker could also spend the night there. “Due to their location near RMK’s Pähni Nature Centre, the megaphones can be used as an exciting outdoor classroom, but they are also suitable for small-scale cultural events,” said Rammo, and added that it is likely that the megaphones will provide an additional incentive to visit the forest, for both Estonians and foreign visitors alike. 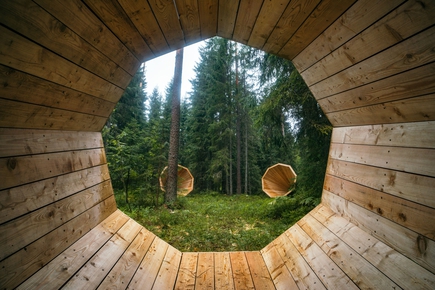 According to Hannes Praks, the course advisor and the head of the Interior Architecture Department at the Estonian Academy of Arts, the creation is perfect for Võru County, which is located 350 kilometres from Tallinn. “When we were initially looking for a site for the project, I was a bit wary of it being so far from Tallinn; however, it is now clear that the site is perfect,” said Praks. “The farther we get from the intense vibration of the capital, the better we are able to sense the low-frequency vibration of nature. This is why the installation would be missing its essence if it were to be located next to Tallinn. In the megaphones, a certain surround sound effect, communicated by the megaphones when the distance and angle is just right, is worth testing.

The students were instructed by architects Aet Ader, Karin Tõugu, Kadri Klement, and Mari Hunt from the architecture office b210, and the designers Tõnis Kalve and Ahti Grünberg from Derelict, a company that creates re-purposed furniture.

The construction of the megaphones was financed by RMK and the Interior Architecture Department of the EAA. The opening events also received help from the Estonian Cultural Endowment.

Photos of the megaphones in the forest and their transport from Tallinn to Võru County area are available here, and the construction of the megaphones can be viewed here and the opening party here.
More information: http://www.ruup.ee/en